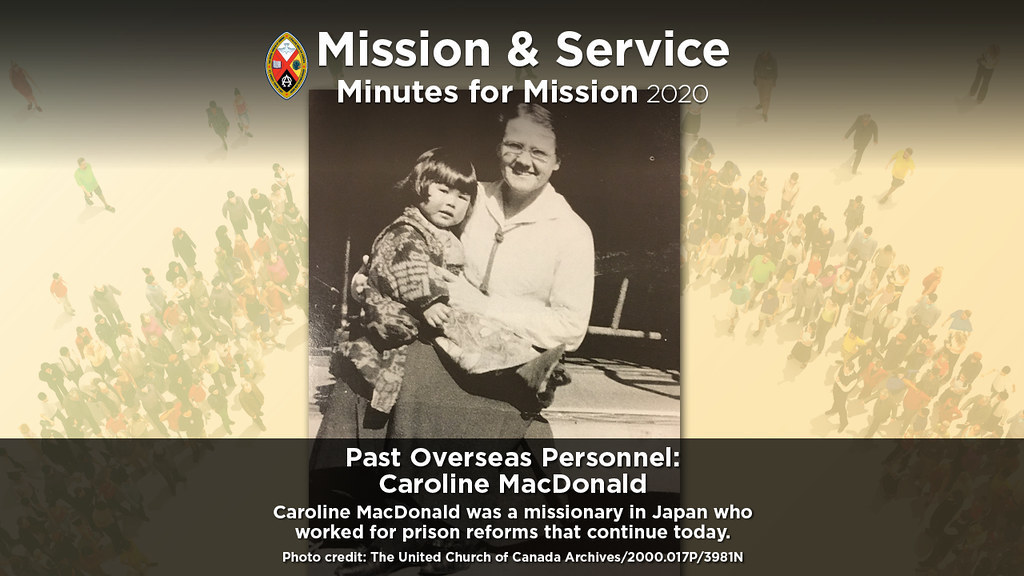 Our gifts for Mission & Service support overseas
personnel and work with global partners.

As we begin Asian Heritage Month, we look back to one of our past overseas personnel, Caroline Macdonald (1874–1931), a missionary to Japan. Born in Wingham, Ontario, she graduated from the University of Toronto in math and physics. She became the first National Secretary of Japan’s YWCA in 1904 and worked to establish hostels for girls in Tokyo. Caroline studied theology in Aberdeen, Scotland, from 1910 to 1911, and after 1913 she became deeply involved in work with prisoners and their families. She was sent to Japan thanks to the support of the Overseas Mission Board, a precursor to Mission & Service. Her prison reforms live on today in Japan.

Her strong sense of prison reform led her to strike up a friendship with Ishii Tokichi, who was sentenced to death for murder. Caroline wrote the preface for his book, A Gentleman in Prison (1922), from which this excerpt is taken:

During the days of waiting he took up his pen to write down the circumstances which led him into crime, and the story of his repentance. He worked night and day until his task was finished, for he did not know when the end might come. I saw him for the last time just a few days before his execution and his face was radiant; but of that day and of the end I shall write when the man has told his own story. The sequel is merely the translation of the manuscript I received from him through the prison authorities, and is reproduced, as far as possible, with the same straightforward simplicity as the original. I have not hesitated to depart on occasions from the literal translation, but I think I have not departed from the spirit.